and the RSHM today's focus on justice, peace and the integrity of creation, promoting "The life and dignity of all our sisters and brothers".

If you received the August newsletter from the JPIC (Justice and Peace in Creation) Network, you will have seen the interview with Reginald José de Sá, a teenager from .  He was asked about the influence of the SHM Extended Family on him:

"For me being a member of the SHM Extended Family means that I recognize the existence of a family beyond that of blood or kinship ties.  It is a living together Which places us where we should be - having the same Father, and really Considering each other to be brothers and sisters. "

A perceptive young man.  He has grasped the meaning of that quotation from the Guidelines, understanding the interdependence of all peoples, and our responsibilities towards each other.

In all the turmoil of the current economic crisis around the world, something has slipped out of sight - the UN Millennium Development Goals.  There is something almost immoral in nations who have been dragging their feet over fulfilling their pledges to the Goals suddenly being able to produce trillions of dollars to rescue their financial institutions.  And yet it is precisely now, when the poor, the dispossessed, the oppressed, the weak, the illiterate and the hungry peoples of the world are in danger of being forgotten yet again, that we must renew our efforts to help them.

Perhaps there is a role for the SHM Extended Family here, acting together to remind our elected representatives and Governments that, even in all the financial turmoil, they have a bounden duty to the poor of the world.  In that way we are "really Considering each other to be brothers and sisters.''

"As you know, we shall be celebrating the 200th birthday of Mother St. John in 2010.  To open the anniversary year, we are having a special weekend in Noddfa the weekend before her birthday (30th January - 1st February).  The Saturday will be the special day of commemoration of the life of Mother St. John and that will be open to anyone from the Extended Family who wants to come for the day. The rest of the weekend, Which is also open to Extended Family will have the framework of a story telling weekend, where we can tell the stories of other valiant women. There will be more details about this later.  We intend to give a 50% discount for this weekend, Which means it will be £ 40 for the weekend and £ 10 for the day. "

"Glory be to God for dappled things ..." 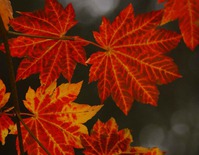 nlAutumnCol6Sm
It might seem perverse to say that the middle of a crisis, like the current economic one engulfing the world, is the very time to re-think what is important to us.

There is panic over trillions of dollars lost by banks and financial institutions.   Those Whose Gods Had Become The acquisition of money and power are shaken and Rudderless.  Even those who Recognize the need for change in the way we do things are still talking about "returning to growth," blind to the damage this could do in the developing world and to the planet.   Where is Jesus in all this?

This is a time of year for taking stock;

Never mind the lost billions of dollars.   Gerard Manley Hopkins, Whose poem "Pied Beauty" is quoted above, knew that it is not money which makes the world turn.   We are truly rich 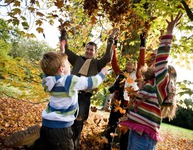 nlAutumnCol1
The world needs to take stock, to rediscover Gospel values and, like Reginald José de Sá, to Recognize and build right relationships with God and with each other.   We need to ask "What is of real value to me?"   If the world and its leaders can appreciate that the financial crash is an opportunity to re-evaluate the things that matter, then some good may yet come out of it. in all that God has given to us.   As the last line of the poem says --

If news seems a little thin this time, that's because contributions were a little thin, I'm afraid.  Do let us know what you're doing in your area: